"Cat, White, Mashiro" (ねこ・しろ・ましろ, Neko, Shiro, Mashiro) is the first episode of the Sakurasou no Pet na Kanojo adaptation. The episode was written by Mari Okada and directed by Atsuko Ishizuka, who is also the series director. It aired on October 9, 2012.

In the classroom, there was boy, named Sorata Kanda, who seemed bored with the class, but soon it's revealed that it was only a dream. After he woke up, the first thing he saw was his cat's butt. After putting down the cat, he found Misaki Kamiigusa sleeping in his room. After tossing her out, and getting ready for school, he gots out of the room, but then get stopped by the dorm adviser Chihiro-sensei, who ask him to fix the nameplate outside the dorm house. While he was fixing the plate, the introduction scene about the anime is rolled out as well: Misaki, the (quite) weird anime animator on room 201; Jin Mitaka, a super-popular guy resides in room 103; Chihiro-sensei, the dorm adviser, who is also a lazy, still-single art teacher at Suimei University of the Arts High School (also known as Suiko); Ryuunosuke Akasaka, a genius programmer resides in room 102, who usually used his self-built AI program Maid to communicate with others; and lastly, Sorata, a very «normal» guy resides in room 101.

At the school, Sorata meets his friends Daichi Miyahara and Nanami Aoyama, who discussed his move out to Sakurasou Dormitory not long ago as a result of picking up some stranded cats. Both of them tell Sorata that if he keeps picking them up, he won't be able to return to the regular dorm. In the end, Nanami handed him a bag of cat-food. At lunch-break, Sorata pays a visit to the teacher room and reported to Chihiro about the nameplate. Chihiro then asked him to do another favor for her, that is to pick up her cousin who will move to Sakurasou and transfer in to Suiko. The cousin is named Mashiro Shiina, a little girl(?) with long-white hair. He accepts the request to pick her up after school.

While walking to the station, Sorata stops by some shops and buys a piece of cake, which he eats while waiting. When he eats the cake halfway, he sees a girl sitting not far from him, with a long-white hair, that closely resembles the photo he had. He guessed that the girl is Mashiro, and goes over to her and greets her. He also stated that Chihiro asked him to pick her up and bring her to Sakurasou. Before leaving, they hold a short conversation about their favorite colors.

Back at Sakurasou, the extremely-energetic Misaki holds a welcome party for Mashiro, which include a huge feast and a show of her new animation. All the lines she takes while playing the animation were completely offtrack. After the animation was done, she asked for the comment on her animation, for which only Jin responded.

On the next day, when Sorata is about to go to school, Chihiro asks him to take care of Mashiro. At first, Sorata has no idea at all, what kind of «taking care» he should do, and just thinks that he just need to do common assistance for a new girl, but soon he'll finds out that what he needs to do is way more than just mere assisting. Mashiro has no idea at all about how to take care of herself, and thus, she needs someone, either boy or girl, family or friend, to take care of everything she needs: clothing, laundry, room cleaning, hair drying, waking up, and such. Mashiro is a completely dependent girl. Left without any choice, he then takes care of Mashiro and make sher get ready for school, before departing to school together. It's already pas the second session at the time they arrived at school.

Mashiro, a girl who is unable to take care of herself 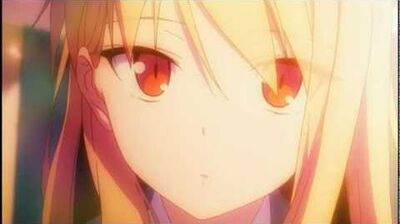