Just A Stone's Throw To Winter

Just A Stone's Throw To Winter (冬の一歩手前で, Fuyu no Ippo Temae de) is the thirteenth episode of the Sakurasou no Pet na Kanojo adaption. It aired on January 8, 2013.

The episode starts with the last scene from Episode 12. However, after Mashiro asks Sorata what love is everything blew out of reality, with Nyaboron even becoming real. Sorata then wakes up.

In school, Sorata was eating on the roof and re-thinking about his dream from last night. Suddenly Jin appears and shows Sorata the peoples' survey responses to Nyaboron. The responses were generally positive. Sorata then tells Jin that he submitted another design for the «Let's Make A Game» competition, with some help from Ryuunosuke this time. They also talked about Rita and Ryuunosuke's commotion at the airport. Not long after, Nanami comes with Mashiro, saying that Mashiro is looking for Sorata. Misaki also appears suddenly from the top of the building, which makes Jin suddenly pretend to be asleep.

When Misaki tries to take advantage of the situation, Jin wakes up and stops her midway. Misaki then hands over a lunchbox she made for Jin that confesses her love. Later in class everyone is talking about what they plan to do for Christmas. At the end of the school day Nanami meets Jin in the locker room and finds out that Misaki sent him a love letter with a form for marriage in it. Jin also gave Nanami a pair of tickets for a performance on Christmas Eve, telling her to «use her props while she can».

At Sakurasou when Sorata was about to change clothes Mashiro appears in his room without knocking, which leaves Sorata shocked. Mashiro then tells Sorata that she wants to learn how to cook. At first Sorata disagrees, knowing that she is too naive be skilled in cooking, but after some arguing he finally agreed and taught Mashiro how to cook. Unfortunately, the lesson didn't go well, as Mashiro cut her finger while cutting cucumber. Sorata then asks Mashiro to tell her editor, Iida Ayano to delay the deadline because of the cut she got. A few moments later, Ayano came and sees the cut.

When she was about to leave, Sorata stops her and said that he needs to talk to her. Both of them head to a restaurant. Ayano then states that Mashiro is transitioning to a «normal» type of girl, as compared to when both of them saw Mashiro for the first time. Ayano asks Sorata whether he prefers the old or new Mashiro (Ayano also makes a point that no matter what he chooses, it's still Mashiro nonetheless), and Sorata said that he prefers the old Mashiro.

Sorata reaches Sakurasou and finds a letter from the competition. It is implied that he lost yet again as shreds the envelope, crumbles the letter, and is visibly upset. Mashiro sees him, and comes in wearing an apron. Sorata asks what she is doing. When she said she was cooking, Sorata got mad at her. Even after Mashiro assured that she'll be careful, Sorata still doesn't abate and gets even madder at her and throws the letter at here while telling her that since she was given the chance to draw she shouldn't waste her time doing anything else. Mashiro then tells him that if that is what he wants, he should 'get out of her" in an uncharacteristically emotional tone. In his room, Sorata looked at note he got from Ayano, which should have been given to Mashiro, when suddenly Misaki appeared in a mini-skirt Santa costume and invited him to go to her room. When he was about to enter the room, he bumps into Nanami and asked her to tag along with him. Inside, Misaki asked them to leave her alone with Jin at Sakurasou on Christmas Eve. While returning from Misaki's room, Nanami asks Sorata to go out with her to the event with the ticket she got from Jin. Sorata accepts it, and ensures Nanami with a pinky swear that he will come. 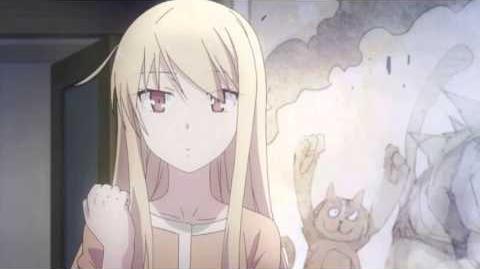