Windows and Lights on Christmas Eve

Windows and Lights on Christmas Eve (イヴの窓辺とそれぞれの灯り, Ibu no Madobe to Sorezore no Akari) is the fourteenth episode of the Sakurasou no Pet na Kanojo adaption. It aired on January 15, 2013.

Sorata, Nanami and Misaki are helping Misaki's with plan to make sure that no one is in the dorm by Christmas Eve except her and Jin. Sorata then goes to Mashiro's room to give her the leaflet for her party, but because the situation is tense between them he doesn't knock and leaves the paper on her door instead.

As Sorata goes down to his room, he sees a baumkuchen on his room's doorstep. Soon afterwards, Mashiro leaps out of hiding. Sorata then hears Mashiro's stomach grumble, and they end up sharing the baumkuchen.

The next day, Nanami's friends talk to Nanami about her plans on the 24th, and conclude that it will be a date. Her friends suggest that she wear a skirt.

Next Jin is seen studying in the library. Tatebayashi Souichirou sees him and talks to him about his plans for studying at Osaka, away from Misaki. Souichirou implicitly insults Jin, saying that he will find someone else there. Jin counters by saying that he broke his relationships with all the other girls he has been playing with, and assures Souichirou that Misaki isn't alone at Sakurasou. Souichirou then asks Jin what he wants, with Jin answering that he wants to be seen as Misaki as someone, not merely as someone she loves.

Back at Sakurasou, Misaki and Nanami were choosing clothes for Nanami's date with Sorata. While talking, Nanami asks Misaki if she isn't scared of laying her feelings bare and running the risk of awkwardness. Misaki says that she is, but she would rather confess her feelings rather than running around the track of terror, which starts with someone at the crossroads of telling a person what they like, to seeing the repercussions of doing so, to amicably settling for a stable relationship, to wanting to have romance, to having the fear of being underestimated, back to the start. Misaki then explains that she's been running around the track so long that she as grown tired of doing so.

The scene then shifts to Sorata, who has just finished writing in his diary. He goes out of the door and sees yet another baumkuchen on his doorstep. He then sees Chihiro-sensei and the two talk. Chihiro-sensei says that Mashiro leaving baumkuchen for Sorata is her way of looking after him. She then mentionsthe fact that it is natural for people to get mad when they see people slacking off while they are working hard, which angers Sorata. Chihiro-sensei explains that Mashiro wasn't slacking off, but was only getting accustomed to the feelings she's having. She further explains that Mashiro doesn't know how to make up with people, and proposes that he apologize to her. Sorata slightly objects, but Chihiro explains that Sorata shouldn't see the world in black and white, but see everything as gray. When asked by Sorata what to do with regards to Mashiro, she tells him to just do something about it as he is a man. Chihiro then reminds Sorata that the dorm will be closed over New Year, as she'll be going to Australia for the holidays, so she tells him to pack his bags and go home.

On Christmas Eve, the monologue from the introduction continues, now dealing with feelings that they cannot handle, feelings that have doubts being expressed, feelings that are unsure of reaching their loved ones, and feelings that collide and slip past each other. Sorata then asks Jin to pick up the cake. Misaki then brings Mashiro, who is dressed-up, and Sorata and Mashiro soon leave. Sorata sees the letter he has received from the contest, but puts it in his pocket. On the train ride, Sorata tries to talk to Mashiro, but is held back by his fear.

At the hotel, Ayano picks up Mashiro, but before they leave, Mashiro begs Sorata to say something, and not be mad at her. Sorata doesn't say what she wants, and reminds her instead to mind her manners at the party.

Sorata soon meets up with Nanami, who is wearing a fancy skirt. He comments on it, saying that it's «pretty nice». Before long it starts snowing. At the same time, Rita and Maid fight, as Maid refused to let Rita talk to Ryuunosuke out of jealousy.

After the play was finished, Sorata and Nanami walk and commented on the play. While waiting to cross the street, Nanami tells Sorata that an audition will come in February to decide if Nanami is good enough to be a seiyuu(voice actor). She tells him that should she fail, she has to go back to Osaka. She then asks Sorata a favor, that he could hear her out on something should she pass the auditions. Sorata then receives a call from Ayano.

It turns out that Mashiro was missing from the party, and according to the hotel staff she went outside. During the call an ambulance passed by, which made Sorata nervous. He then rushes out to look for her and leaves Nanami.

Back at the dormitory, Misaki and Jin are alone together, and Misaki is naked. She asks Jin if he loves her, and he promptly tells her that does with all his heart.

Back downtown, Sorata finally finds Mashiro by a fountain. She gives him yet another slice of baumkuchen, and says that she gave it to him and waited for him outside because he was mad at her for quite a time. She said that she misses him, and tried to think of things that would make him happy. According to her, all she could think of is giving him baumkuchen.

Mashiro then asks Sorata if he's mad. After replying that he is mad, he hugs her. Sorata explains that he is mad at her because she made him worry so much, and that he is really concerned with her wellbeing. Mashiro then says that when she thought of him, she wanted to cook for him (a reference to Misaki cooking for Jin to show her affection towards him). After they both confess, Nanami intervenes.

Nanami hands him the letter he got earlier. Sorata opens it, and finds out that the contest heads want another presentation from him, this time regarding the entry he just submitted. The three of them end up happy.

Back at the dormitory, they see Misaki feeling down. Misaki then reveals what transpired.

As it turns out, Misaki was turned down by Jin, saying that he cannot take care of her well in his current state. Instead, he just tells her to stay the same way she is. Misaki then cries over the fact that she would have preferred being hurt by Jin, given the nature of what he told her, rather than saying it gently.

Misaki explains the «track of terror» to Nanami.

Sorata by the fountain.

Sorata being shocked at Nanami's appearance 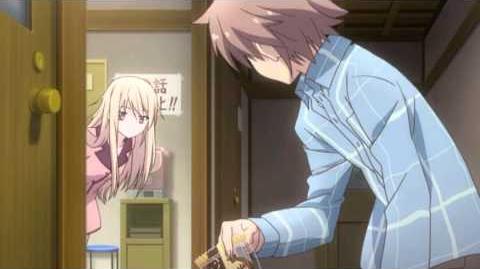