I've Always Loved You... (ずっと，好きでした..., Zutto, Sukideshita...) is the sixteenth episode of the Sakurasou no Pet na Kanojo adaption. It aired on January 29, 2013.

The title is based on a line in Jin's script that Nanami practiced for her audition. It expresses Nanami's feelings towards Sorata, whom she has always loved.

Sorata is seen preparing for his presentation the next day. Nanami comes outof the bathroom and sees Misaki drawing in the common room. The two talk, and Misaki shows Nanami the script for the anime. After Nanami reads it, she asks Misaki if she can borrow it, as she wants to use a couple of lines in the script for her upcoming audition. Misaki lets her borrow the script.

The next morning Sorata receives a phone call from Yuuko. It turns out that Yuuko will be taking her entrance examinations at Suiko on February 13. Yuuko sends her brother her regards as it the day of his presentation, and he hangs up after thanking her.

At breakfast, Mashiro says kind words to Sorata. Chihiro-sensei soon wakes up, and reminds Sorata to stop trying so hard and enjoy the expirience. They then attend the opening ceremony of the spring semester. After the speech, Misaki spots Jin and Souichirou sitting.

Misaki hides from them while making bullfrog noises, but is soon spotted by Sorata. Sorata then goes to Jin talks to him about his absence at the apartments, and he replies that he will return after his entrance exams. Soon, Jin leaves, and Sorata is asked to take the «bullfrog» away.

After school, Sorata is now on his way to the presentation. While riding he receives a text message from Nanami, telling him to «Work Hard». Sorata feels happy with the text, and soon, he begins his presentation.

After a humorous start where he bumped his head on the microphone, Sorata is reminded of Chihiro-sensei's advice not to take everything seriously and becomes motivated. While he was presenting, Fujisawa Kazuki and a companion discussed the game's saleability, and conclude that it costs too much to produce the game (It takes at least 100 million yen to produce the game. To earn back what they spent, they need to sell 45,000 copies. Fujisawa only expects to sell 10,000). Fujisawa's colleague informs Sorata that they can't produce the game, however, he offered Sorata a chance to work with the production team to brush up the concept. Fujisawa tells Sorata to send him an email once he gets home so that he can set up an appointment. Sorata leaves very happy.

Back at the dormitory, the bunch minus Chihiro and Jin, are celebrating Sorata's success. While eating, Sorata thanks Nanami for the message. Mashiro hears this, and goes back to her room to send the same text message to Sorata. Mashiro shows a hint of jealousy towards Sorata and Nanami, saying that Sorata treats Nanami in a special way. Nonetheless, Sorata thanks Mashiro for the picture, which he says really helped.

After dinner, Sorata and Nanami washed the dishes. While doing so, Sorata wishes Nanami luck. Suddenly, Nanami asks Sorata a favor. The scene then jumps to the two of them alone in the common room. Nanami tells Sorata that she has been wanting to tell him something, and then tells him that she has always loved him. After Sorata stammers out the words, he apologizes and says that he cannot do it. It is then revealed that the two were just practicing their lines for Nanami's audition. Mashiro watches them from a distance.

The next day, Mashiro goes to Ayano, and tells her about what she feels regarding Sorata and Nanami. Ayano gives her manga to read and tells her to creatively divert her feelings towards drawing manga.

While on the school roof, Nanami, Mayu and Yayoi talk about Nanami's script practice with Sorata last night. Mayu and Yayoi push Nanami to confess her feelings towards Sorata on Valentine's Day, but she refused to do so.

At night, Sorata helps Nanami practice again. Misaki is busy with her anime. She then takes a break with Mashiro.

Fujisawa and Sorata meet up a few days later. While they were talking about the game, it is then revealed that Fujisawa was Chihiro-sensei's classmate. The conversation continues, and Fujisawa then tells Sorata to give his new game his all, the same way he did for Nyaboron.

Yuuko later arrives at Sakurasou while reading the latest chapter of Mashiro's manga. At dinner, Yuuko gives thumbs-up to Mashiro. Nanami then arrives, and learns that Sorata folded her laundry, prepared her dinner, and even warmed her path. Yuuko interprets the actions as taking care of Nanami, and calls it weird.

In her room, Nanami continues practicing. She then notices the present she bought, which she hides in her drawer. Misaki is preparing homemade chocolates. In Sorata's room, Yuuko goes on about what she heard, and says that she should have set her eyes on Nanami instead of Mashiro. Mashiro soon enters his room wearing nothing but a towel and carrying a hair dryer. After Mashiro asks Sorata how long he's going to look at her, the siblings quarrel.

The next day Yuuko bids everyone good-bye as she's going home after the exam. Before leaving, she gives Sorata a box of chocolates, asks him who will be the lucky girl the next day (Valentine's Day) and reminds him not to be indecisive, as his father told him. Both Nanami and Mashiro wonder what Yuuko said, and the episode ends.

After the ending theme, Rita talks about «cacao mass» and debunks the urban myth that eating too much chocolate will give someone a nosebleed.

It's never too late to tell someone to work hard… 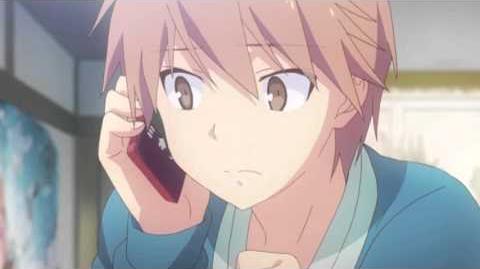