"Graduation Ceremony" (卒業式, "Sotsugyōshiki") is the twenty-third episode of the Sakurasou no Pet na Kanojo adaption. It aired on March 19, 2013.

The episode started with Mashiro, Sorata, Nanami, Ryuunosuke, and Rita going to the graduation ceremony. It is revealed that Rita, with some help from Ryuunosuke, made sakura brooches for the whole student body to wear at the graduation,

Later on, the graduating class entered the halls with the Suimei High School Hymn being sung in the background. The juniors Mashiro, Sorata and Nanami got in the hall just as they were singing, while Ryuunosuke and Rita stayed outside as Ryuunosuke didn't want to tire and bore himself at a ceremony, and he hates tearjerking events. A speech was being given by a lowerclassman thanking the graduating class.

The third year speech representative turned out to be Misaki, much to everyone's surprise since the speech is usually done by student council president Tatebayashi. It is then made clear that the 'love letter' from the previous episode was actually the speech Misaki was writing.

Misaki talked about her beginnings and why she applied to Suiko. She recalls her experience of not having friends in middle school, but she was told she could meet people at Suiko. Soon, she associates her new-found friends with the Sakura Dormitory. The mere mentioning of the dormitory irked the administration.

Misaki then continued her history, now moving to when she first moved in the dorm. She reveals that after less than a week after being in the regular dorms, she was evicted and had to move in to Sakurasou, where at the time the only resident was Chihiro-sensei. She tells about her desire to have the rooms filled (in Episode 19, this fact was foreshadowed when Jin told Sorata that Misaki wanted someone to occupy Sorata's current room). She then reveals that her dream came true.

She reminisces about how her last year turned out, with constant dreams coming true for her. She then mentions Mashiro, revealing her as the new resident that spring. She then moves on to the 'hot pot' tradition, stating that it sometimes seemed that they were having hot pots almost every week. Next, she talks about the bunch sneaking into the school pool, followed by the cultural festival.

She talks about the winter, which represented bad times for them. After that, she thanked each of the residents in the dormitory, concluding her official speech. Afterwards, against the wishes of the school, Misaki talks about the school's plans to demolish Sakurasou. She publicly begs everyone in the hall to support their campaign against their dormitory's demolition.

This angers the school head, who commands Misaki to stop. However, Jin intervenes and reminds the school head that he approved the change in the speech. Infuriated, he commands other school adminstration members to evict Misaki from the stage. Just as she was about to be evicted, Sorata grabs the microphone and diverts the henchmen towards him. Nanami and Mashiro soon follow with their own comment as security comes after Sorata.

The student body soon follow, touched by the resident's actions to protect what they cherish. They stand up unanimously in support of Sakurasou. By this point, Sorata starts to cry, touched by their overwhelming support. He then rushes up to Misaki and tells her that he does not want her to leave yet. Misaki encourages Sorata, telling him to achieve with new residents what they hadn't done with her.

A school administrator then commands everyone to go to their seats. Ryuunosuke then steps in and reminds the school heads that the audience is on their side. Souichirou then stands up and reminds the prinicipal that Sakurasou was found to cultivate the talents of art students without the 'concern for the critical eye of society'. Chihiro-sensei then demands that the school take a vote on the issue. Jin takes the mike, but Misaki proposes that everyone who wants to vote against the demolition 'fill the air with cherry blossoms'. The student then toss their brooches into the air.

The scene then fades to the blue skies. As it turns out, Sorata and all of the residents of Sakurasou were kicked out the auditorium, but they succeded in reverting the headmaster's decision to demolish Sakurasou. Soon, Kyou no Hi wa Sayounara, an elementary graduation song is sang (with the piano melody played by Himemiya Saori inside). While singing, the group holds hands and runs away…

Nanami looks cute when she's crying. Well, at least like this.

The principal is mad. Very mad.

Coup'd'etat. By Sorata and Sakurasou.

You don't mess with the Dragon and his schoolmates.

The vote's result. Doesn't matter, we ran in the sun…

The vote has been made! 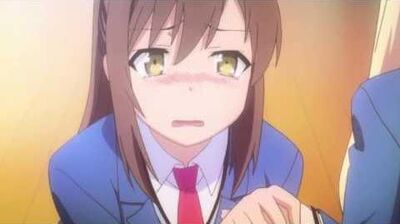