A World Changing Colors (色を変える世界, Iro wo Kaeru Sekai) is the fourth episode of the Sakurasou no Pet na Kanojo adaption. It aired on October 30, 2012.

In the beginning of the episode, Sorata has started to pack his things, preparing to move away to the regular dorm. While he was packing, he remembers the moment he told Mashiro that he plans to leave Sakurasou. Afterwards, Mashiro has focusing all her spare time to finish her manga for the competition.

After he finishes packing, Sorata tries to leaves the house, when Misaki stops him and shows Mashiro in her yukata. Shocked, Sorata can't give a proper comment and the two girls leave after calling him an idiot. After they leave, Jin comes out and says that they are going to celebrate Tanabata and gives Sorata a yukata. While Misaki and Jin were helping kids hang up their wishes, Sorata and Mashiro sit together on a bench, thinking about Mashiro's wish. Just after she hang her wish, the rain poured down and the celebration was dismissed.

While all are drying up in the dining room, Mashiro receives a call, which tells her that she did not win the competition. Sorata then tries to comfort her, but ends up hurting her feelings instead. Realizing what he had done, Sorata runs out of the house into the rain. Jin comes out soon after, and try to comfort him. Jin tells Sorata that artistic people sometimes get torn between the real world and their own world. Sorata learns that Jin is in love with Misaki as well, but he can't stand the gap that exists between them. Then they both head home, and when Sorata arrived at his room, he founds that Ryuunosuke has lent him some of his books about game design. He then have a short conservation with his AI, Maid, who says that Sorata should read the books until he tears himself to shreds. Meanwhile, Mashiro isolated herself in her room.

Next morning Mashiro doesn't respond to Sorata's knock when he delivers her breakfast, so he just left the meal in front of her door. He then proceeds to take off the bamboo from last night, and sees what Mashiro has wished for: «That Sorata's wish comes true.». In school, Sorata meets with Nanami, and they plan on taking care of the last two cats that haven't been adopted yet. They continue the conversation on their way home, when suddenly he was intercepted by Ayano, Mashiro's editor, who escorts him to a cafe.

There Ayano showed Sorata the manga. The manga was based on Sorata's experience with Mashiro, but the genders were reversed, with the male being as sure as Mashiro, and the girl as unsure as Sorata himself. Ayano reveals that she told Mashiro to base the manga on the happenings on Sakurasou. She then explains that the manga was great, but the ending wasn't. She also explained that if Mashiro edits the ending, there is a chance that her manga can be published. Knowing the reason Mashino settled with the ending, Sorata rushes home immediately. He stops by the school, handing over his career survey to Chihiro, then he continues rushing home. It is then shown that Sorata listed that he wants to be a game developer. He then rushes home to explain to Mashiro how she had misinterpreted his wish.

After reaching home, he immediately goes to Mashiro's room and explains everything. He explains that he was scared of doing what he wanted out of fear of failure. However, he admits that after he saw her work, he admired her, and that he wishes one day that he will be like her. Sorata's shouting alerts Misaki and she attempts to go upstairs, but is stopped midway by Jin. While explaining, Sorata sees that the food he left earlier remained untouched. He then goes into her room, and sees her asleep. It turns out that she worked all night to get the ending that she wanted, not the ending that happened. Seeing that, Sorata feels touched, and decides to stay on Sakurasou with everyone else. He explains everything to Mashiro once she is awake, including the chance of her manga being published. Mashiro asks Sorata to call her by her first name, Mashiro, from that time onwards. Afterwards, Jin and Misaki rush in and celebrate Sorata's «return».

Mashiro in her room 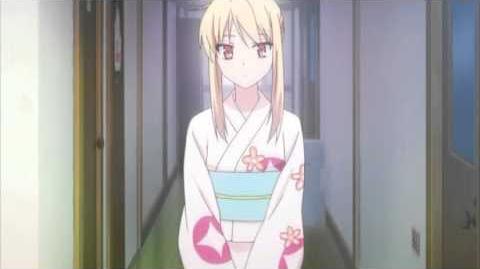