Let's Fire a Big Firework (どでかい花火をあげてみる, Dodekai Hanabi wo Agetemiru) is the eighth episode of the Sakurasou no Pet na Kanojo adaption. It aired on November 27, 2012.

Nanami handed over two letters to Sorata while wearing glasses. Her glasses surprised Sorata, Misaki and Jin. Sorata then opened the letter. The first letter was from the game design competition committee, saying that he passed the first round and he needs to do a presentation on August 31st. The other letter was only a piece of paper with a single sentence, "Koi wo oshiete" (恋を教えて, "Koi wo oshiete"), written on it.

While in his room, Sorata keeps wondering about who wrote him the weird letter when suddenly Mashiro came in and asked «What is Love?». Sorata then concludes that Mashiro wrote the letter. When Mashiro asked again, Sorata tells her about koi fish instead. (This is a pun on 恋(love) and 鯉(the fish) as they are both koi) After the explanation, Mashiro asked Sorata again to teach her about love, because Ayano told her that if she were to write a romantic novel, she needed to feel love. Mashiro also tells him that she will have a serialization meeting, which happens to be the same day as Sorata's presentation. When Sorata tells her that he will have a presentation that day, Mashiro offers to help Sorata, which Sorata declines, since Mashiro also needs to prepare for her meeting. Soon after, Nanami barges in and tells Mashiro to get out, since she is not wearing pants. Nanami also tells not to enter boy's rooms without any pants on.

Mashiro tells Nanami that she came in to ask Sorata about love, which leads Nanami into another misunderstanding, like always. Sorata tells Nanami about the funny letter he got before and about Mashiro's editor, but Nanami still dragged Mashiro out, this time using the excuse that Sorata needs time for his presentation. Suddenly, Misaki hopped in through the window and makes the situation become even worse, which leads to Sorata forcefully push the three of them out of his room. Outside, Mashiro asked Nanami, if she understands what love is.

Back in his room, Sorata asked Ryuunosuke for advice on how to give a presentation. Ryuunosuke mocked him by say «Wear a suit, that's all», but also tells him to practice giving the presentation to everyone at Sakurasou. Depressed and having no idea what to do, Sorata sighed, before realizing that Jin, Misaki, Nanami and Mashiro are staring at him from outside of the room. Jin then offers help to Sorata, which Sorata accepts. The next day, Sorata made a presentation and presented it in front of other Sakurasou residents. His first try was a big failure, so boring that it put Mashiro to sleep.

He then promised to rewrite his presentation and present it again the next day. While he was rewriting his script, Mashiro suddenly entered his room and drew her character design there. Her reason is that she thinks she can understand love better in Sorata's room. After a short argument, he continues preparing his presentation overnight. In the night Nanami prepared some snacks for him after seeing him working. This cycle went on for 10 iterations before Sorata settled on his final presentation.

On the day of presentation, just before Sorata left Sakurasou, Mashiro came up and gave him a lucky charm which she bought all by herself the day before. Impressed by her initiative, he said «good luck» for both of them, then left.

At the presentation, Sorata meets Kazuki Fujisawa, who is one of the judges. Unfortunately for Sorata, Kazuki gives him a question which he unable to answer just as he is about to start his presentation, leading to his game not being accepted. In Sakurasou, he was sitting on the porch, crying, when Mashiro comes out and asked about his presentation. Sorata held himself back, and asked about Mashiro's meeting and found out that she succeeded. He, still sad, asked Mashiro to continue her drawings as a way of asking for her to go away and not ask he did. Eventually, Mashiro goes away with disappointment. Nanami was listening to their conversation.

Meanwhile, Jin and Misaki planned to have a pool party, both to welcome Nanami (since they hadn't done so yet) and to console Sorata. Nanami objects to the plan because she is still concerned with Sorata's mood, but Misaki simply ignores her.

In his room, Sorata tries to throw away the presentation script as well as the letter he got from the game competition, but can't bring himself up to do it. Suddenly, Misaki barges in through the window, bringing a huge box of swimsuits. Misaki introduces the pool party plan to Sorata, and mentions that they will be using the school's pool. Sorata, doubtful that they can use it, is assured by Jin that Chihiro gave them permission. Nanami comes in and refuses, because she knows that Sorata is too depressed to go as well. To her surprise, Sorata said that he wants to go, so she comes ends up coming along.

At the pool, all of them played happily together, splashing and shooting the water. After they finished playing, they cooked some sukiyaki in a pot, but when they about to eat the school guard barges in and chases them. Jin confessed that they actually have no permission to use the pool and asked them all to run «for your life». They hid at the sports equipment room.

With the guard out of their sight, they continue to run and reach the gate and climb out. Outside the school, Nanami wonders whether Sorata is sad or not, and Sorata answered that he is sad. Suddenly, fireworks exploded above them, and they all stood still and watched the fireworks. Mashiro suddenly jumps, and states that they need to keep running because the school guard is still chasing them. Then they all watch the fireworks while keep running down the stairs. Sorata and Nanami discuss about his depression, and isolates the root cause of it to Sorata taking the competition seriously, and not thinking of the joy he had doing it. This, according to him, rendered him unable to escape from his frustrations. He then realizes that the only way to stay happy with what he's doing is to keep doing it, no matter what the consequence. Nanami then shows another sign that she loves Sorata, but he doesn't notice it. At Sakurasou, they continue the party by burning some sparklers. Mashiro and Nanami talk, with Nanami telling the former that she is finally starting to understand what love is.

Mashiro asked about Love to Sorata

Misaki, Nanami and Mashiro get kicked out.

Sorata off to presentation 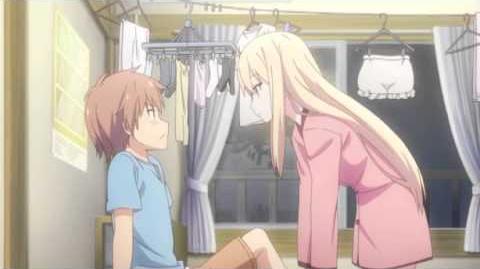