"I've Painted Pictures" (絵を描いてきたの, E wo Kaitekita no) is the second episode of the Sakurasou no Pet na Kanojo adaption. The episode was written by Mari Okada and directed by Kaoru Suzuki. It aired on October 16, 2012.

The episode started with a scene where Sorata held a gathering with other Sakurasou members, telling them about Mashiro's problem and his intention to share the duty with all of them. But somehow the discussion became one-sided and Sorata was appointed by the other members to take care of Mashiro.

Sorata was going to cook some breakfast, but due to his Mashiro Duty and some trouble that Mashiro caused, he wasn't able to cook breakfast, and thus he planned to buy it at a convenience store. In the convenience store, while Sorata was busy choosing the food, Mashiro opened one baumkuchen and ate it immediately. Sorata, who just noticed it after Mashiro started eating without paying, yelled and panicked. While he was busy asking Mashiro about what she did back in England (to which she only responded by saying she painted pictures), Nanami suddenly appears.

After a short conversation with Nanami (and after Mashiro opened another baumkuchen), the three of them started to walk to school. Midway, Nanami asked Sorata about the girl that was with him, and Sorata introduced them to each other. Suddenly, Mashiro stated that Sorata is her first male friend by just saying «he is my first boy», which led to a misunderstanding with Nanami. Sorata tried to fix the mistake, but it ended with Nanami running away, leaving both of them.

At school, Nanami was eating lunch with her friend. When Miyahara asked her about Sorata, she answered awkwardly, which made him become confused and suspicious. Meanwhile, Sorata, who was unable to afford his own lunch meal due to Mashiro, came in conversation with Chihiro while drinking some water. He tried to ask for some «responsibility» from her, but Chihiro changed the subject.

Afterwards, Sorata returned to class. There, Miyahara showed him about the news involving Misaki and Jin, who got splendid reviews for their anime. Soon after, Mashiro came to visit, telling him that she wanted to go home alone. At first, Sorata declines, but after looking around the classroom, he lets Mashiro go home by herself. During that commotion, Nanami kept blushing and got mad at Sorata afterward, indicating that she still was misunderstanding the relationship between Sorata and Mashiro.

After school, Sorata saw Mashiro walking with some woman by the school gate who is actually her manga editor, Iida Ayano. Mashiro then walked home with her. They later passed the convenience store that Nanami worked in, and Mashiro decided to stop by to clear up Nanami's misunderstanding about Sorata and Mashiro's relationship. Before Mashiro left, Ayano popped in between their conversation and bought two baumkuchen since she knew that Mashiro really wanted to eat one.

At Sakurasou, Sorata came home and was welcomed by his cat Hikari, along with a trail of cabbage. Soon, Jin came along and stated that today was his birthday and that those cabbages were the work of Misaki. Remembering Misaki's present the year before, Jin asked Sorata to accompany him, and they found a huge present box inside Jin's room. Inside, Misaki was already waiting, using only ribbon to cover her almost-naked body. Sorata then returned to his own room, leaving Jin behind.

While Sorata was busy playing games (and trying to contact Ryuunosuke), Mashiro entered his room, and asked Sorata to follow her to her room. In her room, Mashiro asked Sorata to take off his clothes, so she can draw the body of a naked man. After a small argument, Sorata agreed with the condition that his boxers will not be removed. Mashiro then started to observe his body and started drawing subsquently. In order to complete her "research, " she also asked Sorata some questions regarding the man-woman relationship. They both continued the «research» all-night long.

In the morning, he met with Misaki and asked about yesterday's commotion. After a short conversation, he took the trash out. While he was placing the trash at the collection point he met with Nanami. They have a short conversation, but Nanami acted awkwardly because she was embarrassed about her misunderstanding. After he arrived back at Sakurasou, he found a book with a nice picture in it and complimented it. Mashiro responded by saying "thanks, " and Sorata became confused. Jin remarked that Sorata had not found out who Mashiro was, so Sorata did some research and discovered that Mashiro was a world famous painter from England.

Sorata finds out about Mashiro

Mashiro eating at the convenience store 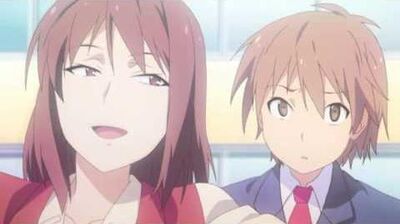