The episodes started with a scene where Sorata is taking a bath, thinking about Mashiro, when suddenly she calls his name and enters the bath. She then talks about «shower events» for her manga, and sprays cold shower in Sorata's face. After doing so, she heads back to her room. Before she leaving, Sorata is about to say «work hard» to Mashiro, but he hesitated.

Soon Sorata finishes his bath. While walking back to his room, he hears some voices in the dining room, which is Jin's talking on a phone. After Jin finishes his call, Sorata comes out and started a conversation with Jin about the call before and about Sorata's goal to leave and problems. Jin keeps pushing Sorata about his goal, stating that he is sick of Sorata's uncertainty towards leaving Sakurasou, until the point Sorata losses his patience and leaves the room. Upon leaving, Sorata meets with Chihiro, who is going to enter the dining room. There, Chihiro and Jin have some discussion about the previous issue of Sorata.

In his own room, Sorata finds out about the «Game Design Competition» from an advertisement, and he seems to be interested in it. Then he tries to contact Ryuunosuke to ask how to make a game, but uncertainty besets Sorata and he simply makes posters for his cats.

The next day in school, while Sorata was posting the posters, he meets Nanami, who willingly helps him to post the poster. Not very long after, Nanami returns, with Mashiro tagging along, saying that she wants to take care of the cats, but got rejected by Sorata. Then, Mashiro asks Sorata to go out with her on Sunday, but Sorata refuses, and tells her to ask Jin instead, under the guise that whatever Mashiro will do that day, Sorata has nothing to do with it.

Sunday morning, Misaki suddenly rushes in to Sorata's room and pulls him off the bed. After the commotion, Misaki tells Sorata that Jin and Mashiro had off to a love hotel for a date. Undoubtedly, Sorata got surprised in instant. Chihiro tried to explain that they just going for some research, but due to Jin's easy-goingness with girls (and the fact that Jin is seen as a playboy), Sorata doesn't believe it. Then Misaki and Sorata rush to chase Jin and Mashiro. With some help from Ryuunosuke's AI Maid, they find the couple. On their way stalking Jin and Mashiro, they encounter Nanami, who is working part-time in the shop. After Nanami returns to work, Misaki feels sad about seeing Jin with Mashiro, asking why can't she be the one next to Jin instead.

After they finish wandering through a shopping mall, Jin and Mashiro walk towards the love hotel. Misaki cannot stand what she's seeing, and is crying. Heartbroken, she goes home. Sorata then tried to punch Jin, but ended up being punched instead. He then faints. When he wakes, he was inside the hotel with Mashiro, with Jin having already left.

After Sorata awakens, Mashiro tells Sorata that all this had been planned thoroughly with Jin (including the fact that Jin would have taken the punch, but reflexes got the better of him), and her reason for coming to the hotel is really for research. Inside the hotel, Mashiro tries to sketch about the hotel for her manga. Sorata then berates Mashino for not thinking of the implications of going to a love hotel with a guy, but Sorata ends up being defeated by Mashino, who says that she was there for research, but Sorata wasn't really there for anything at all. She then says that it's Sorata, not her, who doesn't understand his purpose of coming there. This strikes Sorata, as it also implies that Sorata really doesn't know where he should belong, as compared to Mashino, who is adamant that she wants to paint.

That night, Sorata calls Jin and asks him to go back to the dorms for Misaki. Jin says that he cannot bear seeing Misaki depressed, as he will «fuck her silly». Sorata also reflects on what transpired with his fight with Mashiro. From the talks, Sorata decides that he wants to leave Sakurasou. On the following day, Sorata declares that he want to leave Sakurasou, which only make Mashiro angrier towards Sorata.

Sorata and Mashiro in Bathroom

Sorata, Nanami and Misaki in hiding 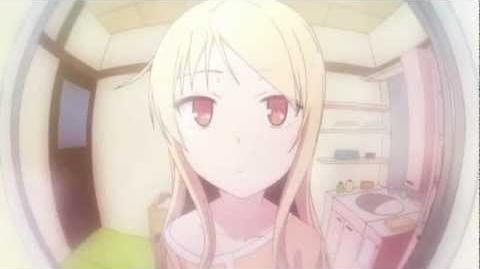