She Attacks (彼女のきょうしゅう, Kanojo no Kyōshū) is the seventh episode of the Sakurasou no Pet na Kanojo adaption. It aired on November 20, 2012.

A girl is seen walking at the start of the episode who turns out to be Yuuko Kanda, Sorata's little sister. Upon arrival at Sakurasou, Yuuko witnesses Sorata with Mashino naked. This was the result Sorata slipping on a banana peel «placed by the gods» while chasing Mashino in order to her to put her underwear on.

Yuuko and Mashiro are in Sorata's room, with Yuuko acting a bit violent towards Mashino. Sorata tries to call his mother, but reaches his father instead. He tried again, and contacted her successfully. Sorata's mother told him that Yuuko decided to come because she had questions about high school (it is revealed later that Yuuko is in her third year at middle school.) After calling, Mashiro asks Sorato what Yuuko's relationship with him his, and Yuuko asks the same question to her. Mashiro bluntly says that Sorata is her «owner», which undoubtedly gives Yuuko the wrong impression. Meanwhile, Misaki was taking a driving lesson, where she just kept stepping on the gas pedal and ignored the brakes. Her teacher, Shiori, was terrified by her recklessness.

A few moments later, Nanami returned home and immediately goes to Sorata's room. She is surprised, seeing that a little girl is clinging unto Sorata's arm. Sorata then hurries to clear any misperception, but Nanami's response just made Yuuko more suspecting of their relationship. She then asked Nanami about why she is so close to her brother. Nanami replies that Sorata helps her a lot, but Yuuko misinterprets the answer as being sexual. In effort to prove that there is another guy in the house, Sorata knocked at Ryuunosuke's room, but only his Maid replied, which convinced Yuuko that her brother was living at a harem house. While both of them chased each other towards the hallway, they noticed that it was flooded with flowing water. Mashiro then says that the bath broke after she used it earlier.

Sorata then hurriedly fixed the bath, with Yuuko tailing him. After the bath was repaired, Mashiro appeared in front of them, rubbing her stomach. Mashino said «it's ready», which Yuuko interpreted as something malicious. In fact, Mashino only wanted to say that dinner was ready. After the mess was cleared, the residents of Sakurasou (minus Ryuunosuke, as always, and Misaki, who still in the driving school) have dinner. Then they go to the public baths as a result of their private bath still being broken.

At the baths, Yuuko is seen insecure over Nanami's and Mashiro's breasts, which are bigger. First, Yuuko was touching Mashiro's, then Mashino and Yuuko were teasing Nanami. Nanami's screams alert the guys, and Jin teased Sorata, loudly asking whose body he is imagining. Nanami responded by throwing a tube over which successfully hit Sorata's head. Yuuko then protests about being the only one still «small», but Jin then comforts her by teasing Nanami. Meanwhile in the driving school, Misaki kept driving recklessly, but she manages to arrive and park safely, though Shiori was visibly terrified.

The next day, Misaki was still attending the driving lesson, with the same recklessness as yesterday. At Sakurasou, Sorata now has a habit of checking the mailbox every morning to check whether his game competition result is out. With nothing in the mailbox, he then returns to his room. In his room, Sorata asked Yuuko about the high school advice she was talking about. Yuuko reveals that it was only an excuse so that she can go see Sorata. She then proposes a date. Hearing the word «date», the other two girls responded and asked to tag along as well.

On the beginning of their «date», Sorata asked why the two of them, who obviously have other works they need to do, tagged along. Nanami excuse was «Today is my day off», and Mashiro's reason was that Ayano, her editor, suggested to her that she live summer to the fullest. Yuuko, as always, got a different impression of what Mashiro says, and tends to think about something «vulgar». They then visited a park with various stands around the site. Finally, they reached a shrine and prayed there. While leaving the shrine, the party splitted into two without any of them realizing. Nanami, who was with Sorata, suddenly tripped on the stairs. Lucky, Sorata manages to catch her, and Nanami blushes. After this commotion, Nanami realized that they had been separated, and start looking for the other two. Meanwhile, Mashiro, who was with Yuuko, is walking around the stands. They stopped in front of a candy apple stand, where Mashiro picked a apple and ate it (without paying) then leaves. Both of them the sat on a staircase, tired of walking around. Yuuko started to doubt that Sorata will find them, but Mashiro kept believing in Sorata, saying that «he is in charge of her». Eventually, Sorata does find them, but has an encounter with the candy stall owner who demands payment for Mashiro's apple.

On the next day, Yuuko leaves for Fukuoka. She then announced her intention to study at Suikou so that she can be with her brother. The three respond her announcement with pure happiness and say that they will wait for her to come along next year. Yuuko then proceeds with explaining Sorata's relationships, but before she even finished, the train departs. Misaki, still in driving school, finally managed to get her driving license, and was waving the card happily in the air, while her teacher, Shiori, has a pale face on the side of the car, regretting that she had Misaki as her student.

Sorata tries to call his mother 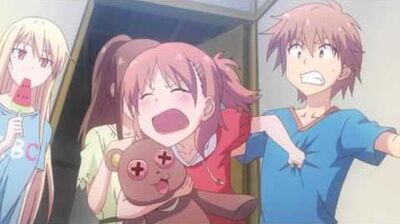