An Autumn Storm Blows In

An Autumn Storm Blows In (秋の嵐がやってきた, Aki no Arashi ga Yattekita) is the ninth episode of the Sakurasou no Pet na Kanojo adaption. It aired on December 4, 2012.

Sorata is jolted awake by Misaki and Mashiro painting on his wall. They are drawing a character called Nyaboron who Misaki has imagined since she was in kindergarten and is finally getting serialized. She also tells that it takes three days to tell the summary of series.

At school, Sorata meets Nanami, and asks her to pick him up tomorrow before leaving for school as he barely made it that day. (This as because Misaki removed the battery from his alarm clock.) Suddenly, the class began to discuss rumors about the two, which involved Nanami chasing after Sorata by joining him at Sakurasou. Just when the two of them reach the peak of their embarrassment, Sorata's friend, Daichi Miyahara (who likes Nanami) stands up and tries to defend both of them. Unfortunately, it develops into a new rumor now with Miyahara and Sorata in a homosexual relationship. Back at Sakurasou, Nanami protests at dinner about how Sakurasou's lifestyle is responsible for the rumor, and insists that they fix the way of living in Sakurasou.

While they were having dinner the doorbell rings and Sorata goes out to open the door (because he was standing up, and had a streak of bad luck). To his surprise, the person behind the door was a very pretty, blond and foreign-looking girl named Ainsworth Rita. Surprised with what he saw, Sorata become speechless, and when Rita flirts in Japanese, he says « I cannot speak English», in English. Later Mashiro and the rest of Sakurasou members come out. Mashiro jumped out and hugged Rita. Chihiro, who also recognized the girl, introduced her to all of the stunned Sakurasou members, saying that Rita was Mashiro's roommate back in England. Rita then continues the introduction by telling them her name. Rita also stated that her reason for coming is to take Mashiro back to Japan, which Mashiro vehemently rejects. Mashiro then pushes Rita out of the house and closes the door behind her.

Feeling somewhat sorry, Sorata goes out and takes her inside stay, despite objections from the rest of the household.

Rita insists on sleeping in Sorata's room. While he refuses at first, he finally agrees after Rita promised him that she will tell all the past of Mashiro in England. Mashiro is also a childhood friend of Rita. In the morning, Rita fell down and hugged Sorata in his futon, which an awkward moment for Sorata once he awakened. When morning came and Nanami opened the door, she was surprised with the scene she saw: Rita, half asleep, hugging Sorata in his futon.

Soon after, Mashiro comes in and sees what happened as well. She then asked if Sorata is on Rita's side now. Sorata was about to respond in the negative, but suddenly Rita stops him and answered that she will keep staying with Sorata until Mashiro decides to go back to England. The other members of Sakurasou join up to tease him, creating a ruckus. This stopped with a protest from Ryuunosuke, who finally came out of his room simply to fulfill the mandatory attendance requirement. He also introduces himself to all the «new» members of Sakurasou (i.e. the members he never saw in person)

At school, Ryuunosuke was noisily typing on his keyboard while eating tomatoes. This makes his teacher, Koharu Shirayama, angry. When she tried to get his attention. Ryuunosuke stated that only came to class to fill the minimum attendance requirements, which makes her more pissed. Ryuunosuke pisses the teacher even more by telling her to teach something that would interest him if she wishes to get his attention. Meanwhile, Sorata and Nanami are discussing Rita and Mashiro. Nanami also reminds Sorata that not everything has a second chance: if Mashiro returns to England, he couldn't easily make her come back to Japan.

Back at Sakurasou, Sorata was trying to re-think everything that Nanami has said while finishing Mashiro's laundry. Once the laundry is finished, Sorata is about to return the laundry to Mashiro, but he accidently meets her just outside his room. When he about to return it, Mashiro replies with "Stupid Sorata" (空太のばか, Sorata no baka). This statement is repeated several times by Mashiro whenever they meet: in the house, in the school, and even during the Tropes First and Last Letter tournament for Anglo-Japanese Relations game Misaki set up.

A few days later at school, Mashiro was painting in the art room. When Sorata was on his way to fetch he he saw some of her classmates going out from the room with desperate faces. Wondering what happened, Sorata takes a peek and finds that Mashiro was currently painting. Sorata then waits outside the room. While Mashiro was painting, he texted her about exactly how he feels regarding the issue of her returning to England, saying that he doesn't want Mashiro to return to England because he wants to see her manga being serialized. He said that he isn't on Rita's side, but he isn't on Mashiro's side, either. Mashiro then replies with a single letter さ (, sa), and linked it with sentence «Sorata no baka» when Sorata asked her what it means. Sorata yells to her that the phrase doesn't even contain sa, but his reaction makes her happy. This is is a development, given their tense terms over the issue.

Back at Sakurasou, all of the residents are discussing the upcoming cultural festival. Misaki and Jin, who will graduate at the end of this term, are tasked to make a great festival which they will remember. Misaki then proposes to make something that only Sakurasou members can make, and divides the labor based on the residents' talents: Mashiro and Misaki for the graphics, Jin for the script, Nanami for the voice and Ryuunosuke for the code. Sorata suggests that they make something that requires the audience's reaction to make the story go on, and later Mashiro suggests that they use Nyaboron as their basis. After the plan was laid out they all appointed Sorata as the director. Sorata became speechless as he's somewhat terrified by the idea of bringing all of Sakurasou together, but he accepts the job in the end. Later Mashiro comes into Sorata's room while he was busy planning for the festival, and asks Rita to stay in her room so Sorata can focus on his work. Rita doesn't object so long as she can go on a «date» with Sorata.

Next Sunday, Rita brings Sorata to a hotel for their «date», which confuses him about her true intention. Mashiro and Nanami follow the two, but Rita notices them after they enter the hotel and asks them to tag along as well. Rita brings all four of them to an artwork exhibition in a hall in the hotel. While Mashiro was staring at one picture[1], Rita brings Nanami and Sorata to another picture, which as drawn by Mashiro. The picture was incredibly beautiful, which convinces Sorata that Mashiro should return to the art world. However, it remains unclear whether or not Sorata will side with Rita and ask Mashiro to return to England.

After the ending theme, Ryuunosuke is mad at Rita because Rita goes to the bathroom at 6:45 AM, explaining that he uses it at that time and thus she's disturbing his routine.

Rita and Sorata on date

«Sorata, you are the Producer!» 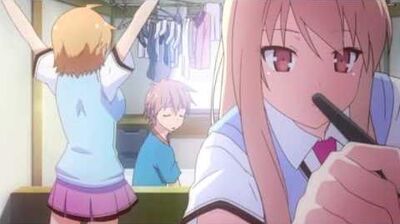