Galaxy Cat Nyaboron (銀河猫にゃぼろん, Ginga Neko Nyaboron) is the eleventh episode of the Sakurasou no Pet na Kanojo adaption. It aired on December 18, 2012.

The Suimei High Cultural festival has finally started. Sorata and Nanami's class open a «Chocolate Banana» stall, with Sorata manning the stall at the start. Miyahara notices Sorata's haggard look, and Sorata explains that he hasn't slept for days due to working on Nyaboron. Nanami, who is clad in her outfit, takes over so Sorata can resume working on Nyaboron.

In the Prep Room Sorata is working with Jin on completing Nyaboron, as well as testing the program's responsiveness. Suddenly Misaki appears, and tossed a bottle of energy drink to each of them. Misaki also asks them all to go out for a while and check Mashiro's class's presentation, where she is dressed as a cat. While the three of them walk towards Mashiro's class, they see Mashiro outside their exhibit, holding a sign.

They enter and see the exhibit. Misaki, who was in a bear costume, served them omelette rice, and offered to draw a caricature of them on the omelette using ketchup. A fight ensues between Misaki and Mashiro regarding who should draw on Sorata's omelette, with the latter winning. Jin's is drawn by another girl from the class, which makes Misaki even more upset.

After they finish eating they all returned to the Prep Room to continue their work.

Meanwhile in Sakurasou, Rita was inside Ryuunosuke's room, watching him finish the program for the animation, while also commenting on the Cultural Festival. She then asks Ryuunosuke to go to the Festival with her, but he replied that due to his gynophobia he can't stand a festival which is bound to have a lot of women. Rita then continues to tease him by getting closer to him and using suggestive body language while badgering him to go to Cultural Festival together, when suddenly the group returns home.

Then the production is moved to Sorata's room. There Sorata was directing the whole work while Rita and Mashiro drew the sketch, Misaki animated the frames, Ryuunosuke finished the program, Nanami practiced for the cover voice and Jin tested the animation out. While the others were busy working, Nanami takes a break and make some snacks for all of them as she can't do much at the moment. She accidentally spills sauce on herself and goes to the bathroom to clean up. There she sees the weighing scale. Soon after, Sorata comes out of the room and goes to the toilet, but finds Nanami is inside, naked. It turns out that Nanami took her clothes of so that she can get an 'accurate' measurement of her weight, because she believed her clothes added a kilogram to her weight. While waiting for Nanami to finish dressing, he sees Rita calling someone about returning to England. Mashiro's need to return to England is further emphasized by the fact that Rita was talking to Mashiro's dad, and that someone was waiting for her there.

The next day in the school work for Nyaboron still continues. Ryuunosuke tagged along in the same maid outfit Nanami wore earlier after Rita slept in his room, which rendered him incapable of staying. Ryuunosuke then asks Sorata to check out the climax. Sorata said that the climax is a bit too plain, but he doesn't have any idea on how to improve it. Ryuunosuke suggests that he go attend Fujisawa Kazuki's speech to find some inspiration.

During the speech, Sorata finds out that to make something good for others, it must first be good for him. After the speech, he encounters Mashiro, who tells him that Jin is with Kamiigusa Fuuka, his ex-girlfriend, while Misaki was staring at them from a distance.

A flashback then occurs, with Fuuka concluding that she's just a proxy for Misaki because Jin didn't want Misaki to be hurt and that he would prefer that his relationship with Misaki remain pure without the blemish of relationships. It is then revealed that Jin's ex-girlfriend and Misaki are sisters. This further explains why Misaki is jealous with Fuuka. Fuuka asks Jin for a second chance, which Jin replying that he has no interest in one. Fuuka replies that the question was a joke.

During the conversation, Misaki hears that Jin will be at Osaka University of the Arts for college. When Misaki runs away, Sorata chased her down, and apologized for not telling her about Jin's plans for university. Misaki doesn't mind, and asked instead if she still had a chance with Jin.

Mashiro answered with a plain «Yes» which suddenly motivated Misaki, cusing her to ignore everything that Sorata said. Misaki then asked them to finish Nyaboron, and make a great memory out of it. During the commotion Mashiro passed out and slept on Sorata's shoulder.

Sorata takes her over to the prep room, where she continues to sleep on his shoulder. Reflecting on what just happened, Sorata remembers that Mashiro showed passion in her manga by drawing what she wanted to happen to Sorata at Sakurasou. Sorata got an idea, and tells the others his idea to add «passion» to it. Instead of shouting the move's name, the audience would go and shout whatever sentiments they have. After it was agreed upon all of them work hard to finish the revision. Upon completion they had five hours left before the show, which they use to go sleep for a while and recharge. While trying to sleep, Sorata received a text from Mashiro, wherein she says that she wants to see him. He finds Mashiro outside his room, where she asked him to watch over her until she falls asleep.

Sorata and Jin testing the program 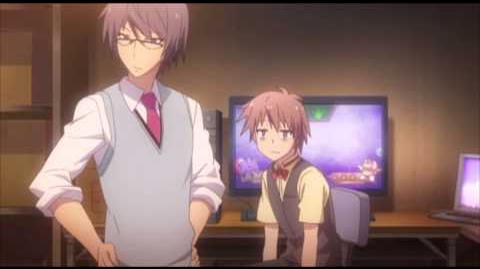