Where's Your Usual Self?

Where's Your Usual Self? (いつもの自分はどこにいる, Itsumo no Jibun wa Doko ni Iru) is the fifteenth episode of the Sakurasou no Pet na Kanojo adaption. It aired on January 22, 2013.

The episode beings with a reprise of scenes from the ending of the previous episode. Afterwards, a new scene depicts Sorata, Nanami, Misaki, and Mashiro sitting together on a train.

The shows flashes back to a scene at Sakurasou where they were discussing the fact that it will be closed at New Year, since their adviser, Chihiro-sensei is going on a vacation to Australia. Sorata finds out that no one has made preparations for it, since Mashiro didn't make arrangements, Nanami simply can't go home, and that Misaki refuses to go home because it reminds her of Jin. To solve the problem, Chihiro asked them to just stay with Sorata in Fukuoka. Mashiro agrees and asks them to hurry with packing.

In the train, Sorata was playing with his cat Komachi (the other six were found a home over the break), while talking to Nanami regarding him going home with three girls. Misaki, still feeling depressed, simply looks out the window and stays silent. Mashiro, expressionless as always, gives Sorata a snack. Soon they arrived at the station. At Sorata's home his little sister, Yuuko, is shocked as to why he brought the female residents of Sakurasou with him. Then their mother, Kanda Akiko, suddenly shows up and greets them all. Yuuko then realizes that everyone at home except her already knew about the visit and they just didn't tell her because they wanted to surprise her. Their father then appears next, and commented that he rejects polygamy (referring to the fact that Sorata brought along three girls with him). Akiko then calls them for dinner. Nanami compliments Sorata about his family, and the reason he could adapt to Sakurasou, while Misaki keeps thinking about Jin.

In his room, Sorata calls Jin, asking him what happened during Christmas Eve, and what made Misaki depressed. Jin then tells Sorata everything, about him confessing his love for her, but also points out that he has dreams he wanted to achieve for Misaki's sake. Jin also tells that he broke up with all of his girlfriends, just for Misaki's sake. At the end Jin asked Sorata to take care of Misaki for him. It is revealed that Jin was staying with his «best friend» Tatebayashi Souichirou. After this scene the whole Kanda family and their guests have dinner. After dinner, Nanami helps Akiko wash the dishes, and Akiko suddenly states that Sorata has found a good future wife (Nanami) for himself.

Mashiro, Sorata and Yuuko, who are still at the dining table, are all surprised by the statement. Mashiro then asks Sorata whether he wants a wife while Yuuko grabs her brother's arm and declares that anyone who wants to become Sorata's wife must defeat her. Mashiro takes the statement seriously. Yuuko then replied that she wants to apply to Suiko, but her father won't let her. Nanami later offers help to her study in order to change her father's mind and let her apply to Suiko. Meanwhile, Misaki was starring at the script that Jin gave her before he left.

The next day, Sorata started preparing his presentation with help from Ryuunosuke's AI program, Maid-chan. After Sorata thanks Maid-chan, she then invites Sorata to take a short trip to England to express his thankfulness by inflicting misery on Rita, as well as asking Sorata for how he did on his completed presentation later.

Shortly afterwards his little sister comes in and asked for his help with studying. Before they could even start studying, Sorata notices a magazine in her stack of books. Yuuko says that she loves a manga created by no other than Mashiro, without her realizing that the author of her favorite manga is in the room, though she comments that the depiction of Misaki and Jin's relationship confuses her. After realizing that Mashiro is the author of the manga, Yuuko suddenly changes her attitude towards her and asked for an autograph. Nanami soon comes in and takes Yuuko with her to study. At the same time, Sorata asks Mashiro about her manga deadine. Mashiro then tells him that she already finished all of it long before. Then Mashiro tries to confirm if Sorata meant what he said at Christmas Eve.

After Sorata confirms it, Mashiro gives him a picture for his presentation. He practices for presentation later, and in the end it is well-recieved.

After the practice, Sorata went back to his room, reviewed his presentation with Nanami, and asked her what she would ask if she was one of the judges. He also stated that he is still kind of nervous about presentation, which will be held a day after New Year. Nanami replies that if she is part of the company, she will ask about the marketability of the game. Sorata reacts with surprise, since he did not consider that aspect, and then he completes his presentation. After thanking Nanami, Sorata asked if he bothers her by asking her to help him all the time. Nanami states that she is not bothered, and helps him because she wants to. She also says that if Sorata wants to thank her, he can just help her later when her script for the audition arrives. Sorata replies that he will help no matter what because he wants Nanami to pass the audition and bear fruit to her hardwork. While both of them promise each other to work hard, Mashiro barges in and states that she also wants to work hard with them. She then leaves the room.

In the hallway, Mashiro meets with Misaki and asks her about her relationship with Jin and what she really desires. Mashiro then tells her that her manga is based on Sakurasou daily activities, but Misaki and Jin are a couple in her story. Misaki stated that she wanted to be by Jin's side forever. Mashiro continued asking, about what is it in Misaki that Jin likes while offering her a benchmark, saying that Sorata loved her for her drawing ability. Meanwhile, Sorata and Nanami cook soba [A New Year's eve tradition in Japan is for people to eat soba noodles, see Japanese New Year] for everyone. Akiko, amazed at how hard Yuuko studied, asks Sorata to help Yuuko as well. Sorata then asks his mother to tell their dad that he wants to talk to him whenever he has time.

Surprisingly, his father appears just a moment later while Sorata is having a bath. Sorata then ask his father to let Yuuko try for Suiko, and if she fails the test, he can divert Yuuko to a local highschool by then. This way Yuuko will accept everything. His father teases him about the girls, and asks who is the one that his wants, and scolds him to stop being indecisive He also tells Sorata to live his life the way he wants. His father clarifies that he would let Yuuko study at Suiko if she passes, but neither of them think she will make it. After talking, his father got dizzy and ask help to get him out of the bath, which he took over.

Earlier next morning the family and all their guests head out to a mountaintop to see the sunrise from there. Meanwhile, Misaki keeps thinking about what Mashiro asked her earlier. At the mountain Yuuko, who knows that her brother talked to their father, thanked Sorata. Misaki thanks Mashiro as well, who helped her (although indirectly) to realize what Jin means to her, and the side of her than Jin likes.

Misaki also realized her mistake of being so depressed over Jin and promised to return to her old self and turn Jin's script into anime. While they were talking the sun rises, the first sun rise in the New Year (which is a tradition in Japan, see Hatsuhinode). At that moment all of them yelled their wishes, their dreams and all of their heart's burden out loud at the the rising sun. Mashiro shout's «meat ball beam», a reference to their project earlier. After the holiday ends, the four of them return to Sakurasou happy, with new encouragement to pass all incoming obstacles and schedules. The first one coming up is Sorata's presentation.

Jin handed over a script

Mashiro and her fan, Yuuko 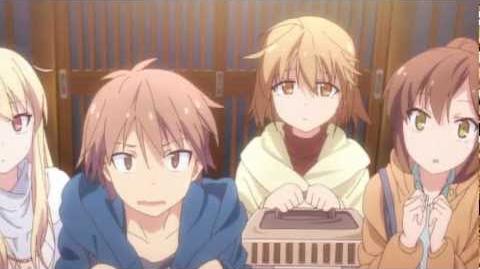