Valentine's is a Day for Chocolate

Valentine's is a Day for Chocolate (バレンタインはチョコの日よ, Barentain wa Choko no Hi yo) is the seventeenth episode of the Sakurasou no Pet na Kanojo adaption. It was aired on February 5, 2013.

Sorata was feeding his cats early in the morning when he sees Nanami dressed up and ready to leave. He is disappointed when he fails to wish her luck before she leaves. In Mashiro's room, Mashiro receives a phone call from Ayano. Ayano informes Mashiro that the artist in charge of the cover was sick, and tasks her to do it instead. She hangs up and takes off her underwear because Ayano told her that yellow is not suitable (for the cover), and her underwear was yellow, and she switches it for a more colorful pair.

Sorata calls Mashiro, and is surprised to see she dressed herself, even with a few minor errors. While Sorata checked if Mashiro was all set, Rita came in. Rita came all the way from England for Valentine's Day, setting aside the day as she believes that it is a showdown for women. Rita «goes to battle», and finds Ryuunosuke. After a chaotic encounter between Rita and Ryuunosuke, Sorata and Mashiro leave.

Sorata later arrives at school, and talks to Nanami. He apologizes to her for not being able to encourage her earlier, which she accepts. Nanami reminds Sorata of the promise he made to her in Episode 14. Miyahara then intervenes, but leaves shortly after wishing Nanami luck.

Class starts, with a lesson on chocolate. While Koharu-sensei bitterly teaches the students about love, Sorata receives a text from Mashiro, saying that she will be on the roof waiting for him after school.

Rita and Ryuunosuke are back in the dorminatory, with the latter avoiding Rita by staying in the bathroom. After he meanly rejects her chocolate, she confesses that she was really happy that she received an e-mail from him on Christmas Eve. He shrugs it off, saying that it was merely a sign of respect. She is saddened by this fact.

Classes soon end, and Nanami goes to her audition while Sorata is on cleaning duty. While on his way to take out the trash, he sees Misaki and Saori together on a bench. Misaki is seen holding chocolate for Jin, which Sorata commented as being pretty small for the efforts she's made the previous night, but sufficient nonetheless. He then proceeds to take out the trash.

Sorata looks at the roof and hopes that Mashiro hasn't been waiting too long for him. He then receives a call from Nanami. As it turns out, the trains have stopped, and transportation is difficult. Sorata then goes on his way to get her, and regretfully informs Mashiro that he will be late. On his way, he spots Miyahara. Sorata asks if he could borrow his bike, and tells him about the situation. When Miyahara heard that the situation involved Nanami he offered Sorata a ride.

Later, Miyahara is pedalling the bike uphill. As they get to the peak, Miyahara offers the bike to Sorata, telling him to go on without him as Sorata was the one Nanami called for in her dark time. Sorata soon reaches the station.

Nanami is sad because the situation seems hopeless for her. Sorata then tells her not to give up on her dreams because she promised him that they'd both work hard together. Motivated, Nanami gets on the bike, and the two go on their way.

Back at Sakurasou, Ryuunosuke finally gets out of the bathroom. He goes to the common room to see his present from Rita for Valentine s Day. A note accompanied the chocolate, saying that Rita had left.

The letter also said that she was extremely busy. She offers her apologies to the Sakurasou residents for being unable to see them. She then confesses at the end of the letter that the kiss she gave to Ryuunosuke at the airport was her first.

Saori and Misaki are still at school. As it turns out, Jin failed to show up. This however does not dampen Misaki's spirit as she said that she still has chances. Meanwhile Mashiro is still waiting for Sorata to show up in her classroom. She then leaves.

On their way to the audition, Sorata and Nanami practice for one last time. When Nanami got to the line wherein she says «I love you», she hugs Sorata, implying that it was the real deal. Sorata stops the bike. As it turns out, it was only a ploy, as Nanami asked him if it made his heart skip a beat. Since they stopped a few blocks from the voice-acting school, Nanami runs and leaves Sorata. He then sees the clock, and remembers he forgot about Mashiro.

He makes his way to school, and looks for her. Just when he thought that she went home he sees her on the side of the roof. Mashiro tells him «You always break our promises, Sorata», which he thought she meant because he was late in meeting with her when in reality its because that he forgets to call her by her first name. She then gives him Choco Shoots, which he prefers to Choco Mushrooms.

The two talk, and Mashiro tells Sorata that she couldn't understand him lately. Sorata realizes that both of them have been forgetting each other. However, Sorata still thanks Mashiro for her thoughtfulness. As they were about to go home, Mashiro asked for Sorata's hand, but later takes it back, saying that it makes her heart feel weird and that holding his hand makes her heart beat rapidly. Sorata tells her that it beats because she's alive.

After the outtro, Sorata and Mashiro reach home. They see Nanami, back from her audition already. When asked how the audition was, Nanami gave a confident answer. She also informs the two that they're having a special dinner that night as Misaki wanted a Valentine dumpling party.

I'll be on the roof after school.

Rita feeling down after Ryuunosuke turns her down.

«Your heart beats because it's alive!» 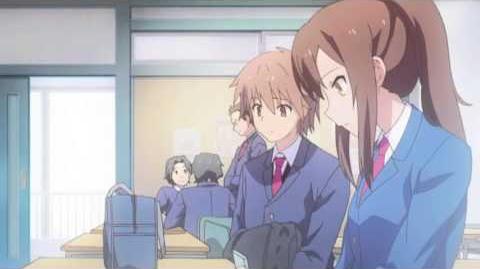