Home Is Where Sakurasou Is

"Home Is Where Sakurasou Is" (住めば都のさくら荘, "Sumeba Miyako no Sakurasou") is the nineteenth episode of the Sakurasou no Pet na Kanojo adaption. It aired on February 19, 2013.

The episode begins with Chihiro-sensei reporting that Sakurasou will be demolished before the next term since a construction firm checked the building over winter break and found it unsuitable. After Chihiro-sensei leaves, the residents debate about their next course of action. Misaki suggests that they talk to the principal, but Jin rejects the proposal as it would probably cause the principal to become more convinced that the dormitory should be demolished. Nanami and Sorata also suggest that they make the board listen to them, but Jin says they should be rational that moving to the normal dormitories would free them of chores and Ryuunosuke suggests weighing pros and cons, saying it will give them more time.

In Jin's room, he and Misaki talk about why the administration wants Sakurasou demolished. The two agree not to let the dormitories be demolished as they believe that it holds sentimental value. In Sorata's room, he explained to Mashiro the implications of the dormitory's demolishment, which ultimately leads to Sorata being unable to take care of her. One of Sorata's cats finds a picture, and Sorata recalls it as the first picture taken of him when he moved in. Sorata then tells Mashiro his story of how he came to the dorm, and his memories before she came.

The nostalgic flashback shows how Sorata moved in, and his first encounter with its residents, including calling Misaki an alien, and Ryuounosuke a ghost, and Misaki celebrating his arrival with a hot pot. After Sorata told Mashiro the story, he is even more convinced that he won't let Sakurasou get demolished. He says that even if the building is old and has its flaws (like Sorata's malfunctioning door lock, the floorboards breaking, the leaks, etc.), the flaws are part of their memories their. He also adds that the problems are one of the things that make them belong in Sakurasou. Everyone agrees to stop the demolishment of the dormitory, even Ryuunosuke after he was disappointed with the school adminstration failing to give them a reason. It can be seen that Jin had him hack into their servers. The students unanimously vow to protect the dorm.

Sorata's room when he moved in.

When Sorata met Misaki for the first time... Taken at Sorata's closet.

Misaki had the idea of calling Sorata "Solanine", which sounds like an organic compound,

Sorata, Misaki and Jin, meeting for the first time.

The ghost of Sakurasou, Akasaka Ryuunosuke

Maid-chan in her early stages.

Nozomi, when Sorata found her at the park. 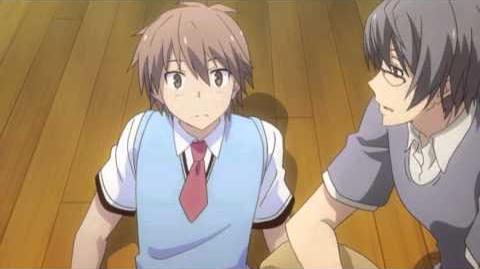