So We Can Keep Calling It Home

"So We Can Keep Calling It Home" (この先もただいまを言うために, "Konosaki mo Tadaima wo Iu Tame ni") is the twentieth episode of the Sakurasou no Pet na Kanojo adaption. It aired on February 26, 2013.

Ryuunosuke was seen in his room, hacking into the school network to learn about why Sakurasou is being demolished. Meanwhile, Sorata, Nanami and Mashiro are at the school gates, asking for signatures for their petition to stop Sakurasou's demolition. They have no success until Daichi comes to their aid and becomes the first to sign the petition. The three feel happy because they are motivated by his support.

Later they were a bit disappointed, as half a day passed and they were only able to collect three signatures. While Sorata and Nanami talk about the petition, Ryuunosuke comes and shows them what he got from hacking earlier: the minutes for the board meeting of the school. Sorata inspects the minutes and finds out the reason for the demolition.

The construction company that visited the dormitory over winter break concluded that the building should not be demolished immediately, but within five years. However, Sorata continues reading and finds out that the administration believes that Mashiro should be moved to the regular dorms so she concentrate on her paintings instead of her manga. Ryuunosuke explains that the school took this position because they need to protect their reputation by preventing Mashiro's talent from being wasted. Sorata storms out towards the principal's office to tell them that Mashiro's desire to draw manga has nothing to do with Sakurasou.

Nanami and Ryuunosuke follow him, with the latter reminding him that they got the minutes illegally and the principle would be suspicious about how they knew. He also reminds Sorata that Mashiro is the reason for the dorm's future demise, and suggests that they let Mashiro go. Furthermore, he rminds that Sorata has a game competition he needs to focus on to. Mashiro appears and briefly interrupt, asking Sorata for further instructions.

After Mashiro left, Ryuunosuke explains the difficulty of their course of action, and suggests that Mashiro should simply leave Sakurasou. Sorata then tells him that he will not simply let go of someone who has been a part of Sakurasou. Ryuunosuke then retorts and wisely reminds Sorata that their friendships are not bound by the dormitory, but by memories. In addition, the Dragon also reminds Sorata that Misaki, Jin and even Nanami will be leaving the dorms, as the seniors will graduate and Nanami will move back to the regular dorms if she passes and leave Suiko if she fails.

Back at their classroom, Sorata and Nanami talk about the latter's predicament. However, Nanami promises that she will help with the petition regardless.

Meanwhile in England, Rita sends Ryuunosuke an email regarding the fate of Sakurasou. Maid-chan responds and meanly informs her that the programmer is at school. Rita then tells Maid-chan that Sakurasou's demolition will mean bad news for him. In response a security flaw breaks out in Maid-chan's coding, and she reveals Ryuunosuke's dark past.

The AI reveals that when Ryuunosuke was in middle school, he collaborated with friends on a gaming project. At first, the work went smoothly, but as they got farther, Ryuunosuke got more and more impatient with the incompetence of his friends. Soon, his friends shunned him and never came back to him. This scarred Ryuunosuke and is the reason that he is a hikikomori. Maid-chan leaves after discussing the problem.

Later, Sorata and Kazuki hold a meeting for the final phase of the contest. Fujisawa notices that Sorata is being distracted and they both take a break. After Sorata explained his predicament at home, Fujisawa reckons that he too once had the same problem involving the love of his life and his job. He reminds Sorata of the art of choosing: that if he cannot choose one over the other, he can always choose neither and make both happen. Now that Sorata's mind is clear, they both continue the meeting.

Later, Sorata and Nanami talk on their way home. They discuss how Nanami wanted to become a seiyuu. When they arrive at the dormitory they see Mashiro looking at the building. As they meet Mashiro gives Nanami the result of her auditions. Nanami, feeling tense, works out the courage to open it.

She then finds out that she did not make it. However, she tries to hide her emotions and manages to smile despite the devastating news for everyone's sake. Just then, Misaki steps out, in a bear costume, with an idea for collecting signatures, which is just wearing costumes while asking for signatures.

The next day, their plan fails as the costumes and Misaki's craziness ended up intimidating the students. Up on the roof, Sorata, Jin and Mashiro reflect on Nanami's failure, and conclude that she is pushing herself too hard again. However, they still admire this, as they see Nanami forcing herself to be happy for everyone at Sakurasou.

Back at the dorm, Rita calls Ryuunosuke. The two talk about how Ryuunosuke feels with the demolition and how he doesn't try because it's futile. Rita reflects on the fact that she felt the same for Mashiro before, finding it illogical to square a circle, but she changed her mind when everyone at Sakurasou was there for her. Rita then tells him that Sakurasou is important for him as well — not only because it's his dorm, but also because he has friends in it: friends that would never betray him.

At school, Sorata and Nanami find a couple first year students who were audience members for Nyaboron. They approach them and find out that they had already signed the petition in the school's computer laboratory.

The gang investigates, and find out that a notebook for the petition was in the lab, and the school homepage was replaced with an explanation of the situation. They knew that only Ryuunosuke could have done it. They rush to the second-year classroom and Sorata hugs him, thanking him for his efforts. The gang's hope is revitalized, knowing that someone has joined the fight in their side. That night, Sorata finds they collected 300 signatures, and Mashiro expresses that she likes Sakurasou.

Chihiro-sensei surely loves Sakurasou, no matter how irresponsible she is at times.

«Ryuunosuke, Sakurasou is a very important place for you as well. You have true friends who will never desert or betray you now. They're worth fighting for.»

Trust me, we've all been through this before.

The scene before ending credits.

I didn't make it!

Being far away from your peers is never a good idea.

Vice-Principal suggests that Mashiro should return to the regular dormitories. 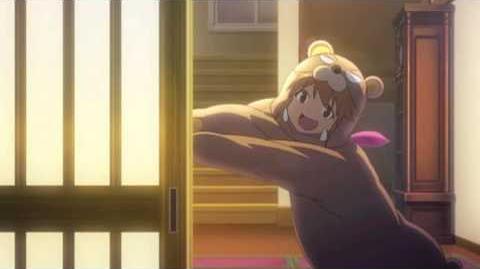