Dash Through Those Brilliant Days

"Dash Through Those Brilliant Days" (きらめく日々を駆け抜けろ, "Kirameku Hibi wo Kakenukero")is the twenty-second episode of the Sakurasou no Pet na Kanojo adaption. It aired on March 12, 2013.

Mashiro is seen with her suitcase in the art room, adding a signature to her recent painting. Satisfied, she smiles.

Sorata is then seen reflecting on the final event from last episode: his heartbreaking discovery of how Mashiro was requested to work for a game team while his proposal was rejected. Sorata clarifies that he did not want to take out his disappointment on Mashiro, but could not help doing it due to his failure.

Later that morning, Kouhai-kun and Misaki see each other. The former is reminded that the graduation ceremony is latter that day. Jin then goes out of his room and reminds Sorata to wake Mashiro up. Just as he was about to do so, Nanami comes out of her room. The two talk about when she cried the day before. Nanami wishes that Sorata would forget that it actually happened, however, Sorata wished that it happened again, but promptly apologized for saying so. Sorata then goes in Mashiro's room, only to find the room unusually clear. Sorata looks for her and realizes that she is gone. He informs the residents, with Chihiro-sensei confirming the grave news. When asked why she let her go, Chihiro-sensei answered that she did try to stop her, but Mashiro really wanted to leave. Sorata then realizes that it was his fault. The bunch go out and look for her at school, leaving Chihiro-sensei. She then reaches for her pocket to get the «thing» that caused it all: the letter to Mashiro from the contest committee.

The troupe soon arrives at school, and proceed to the Art Room. They see Mashiro's bag with her phone in it, which was used to lure them into the room. Sorata soon sees the painting from the episode's intro: Sakurasou with its residents in it. Sorata ponders on why Mashiro made this, and states that even the greatest artists couldn't make something like that, because it was filled with her passion and love. Sorata then observes that Mashiro left herself out of the picture.

Sorata then finally understood why Mashiro left Sakurasou. It was to protect the dormitory (In an earlier episode, the residents learned that Mashiro was the sole reason of why the dorm was going to be destroyed, however, they never told her this). However, the residents of the dorm do not accept her goodbye, as they acknowledged Mashiro as a part of their memory of Sakurasou. Sorata is infuriated with Mashiro's departure, and is advised by Jin to tell her how bad an idea it was for her to suddenly leave the dormitory. Sorata agrees, and the group divides into search parties.

Sorata and Nanami team up. Just as they were about to separate, Nanami calls for him. She then reminded him of the promise that he made on Christmas Eve. She then nearly said that she loved him, as this was what she wanted to say, but instead, thanked Sorata for inspiring her. (She started her message of thanks by stating the lines from her audition piece. Just as she was about to get to the «love» part, she diverges and says thanks instead.). Sorata reciprocates the thanks, then leaves. Briefly after he left, Nanami states that she was able to work hard because she was in love with him.

The search has so far been futile for all residents. Ryuunosuke, realizing the inefficiency of searching by foot, asks Maid-chan to send a message to Rita asking her for places that Mashiro would go should she run away. He instantly receives a call from Rita, and impatiently asks where she was (the call was not international, so he knew Rita was in Japan). Ryuunosuke is surprised to see that Rita was right behind him.

The two briefly joke about past events, including Rita's liking that Ryuunosuke is not able to say special things in a straightforward manner. Rita then tells him that Mashiro never gives up on what she wants.

Back at the dormitory, Chihiro-sense dumps the accursed letter. The doorbell rings, and she opens it to find Kazuki. After she slaps him hard, Kazuki apologizes to Chihiro-sensei for the ruckus that has been caused. (Kazuki failed to realize the implications of his actions, and clarified that a different committee handled the request to bring in Mashiro). The two then move on to the issue of Sakurasou's demolition. Kazuki offers help, only to be turned down, because, as Chihiro-sensei puts it, «they'll work something out».

Back at the school, the seniors Misaki and Jin run out of time when the school bells rang, signifying that the ceremony is near. Just then, Souichirou and Saori come in. Jin gives Souichirou something disguised as a «love letter». The four then proceed towards the venue. Sorata was still looking for Mashiro, when he reaches the open-air market and is tipped that Mashiro was walking towards the station earlier. While Sorata was running, he recalled his first days in the school: boring, but he blamed others for the boredom he was experiencing. He then recalls the first time he met Mashiro, and just while he was doing that, he saw her walking by. Naturally, he chases her.

At the train tracks Mashiro regretfully says that she has to leave Sakurasou, because she failed to fill up the notebook with signatures. She then becomes devastated, saying that her hardwork earned them nothing, that she's the sole reason behind the dorm's demolition, and even makes the bitter assumption that Sorata hated her because it made Sorata sad everytime she succeeds, and he fails.

Sorata then asks her to listen to him, and she uncovers her ears. Sorata then confirms that what he said that night were his feelings, that the fact that Mashiro had success, which is what he wanted, made him jealous and almost brought him to the point of hating her because of the insecurity. However, he acknowledges that those feelings were only part of what he felt towards her, as he said that it was her that opened his eyes to what he wanted, and he was happy for the all the moments they shared together. Just then, the train arrived. Nevertheless, Sorata shouted that he loved Mashiro. However, the train soon departed, and she was nowhere to be seen, leaving Sorata shocked. Meanwhile, Nanami saw Sorata, and heard him profess his love for Mashiro.

Suddenly, Mashiro stepped down from the stairs near Sorata. She then stated her desire to stay with him, but also laments her assumption that staying there will not only make the dormitory disappear, but also make Sorata sad and cause more trouble for Nanami. Nanami then steps out of the vineyard and scolds Mashiro for blaming herself on Nanami's failures, saying that the failures and experiences were solely hers. However, she then gladly tells Mashiro her satisfaction that Mashiro cared about her, and hugs her. Mashiro, shocked by the compassion and her unexpressed emotion, begins to cry. Nanami then reminds Sorata of what he has to tell her.

Sorata then tells Mashiro that Sakurasou is not the building itself, but the residents in it. Mashiro then understands his point, and wisely tells the two that they will always be in Sakurasou. Ryuunosuke and Rita arrive, and remind the three that they have a ceremony to attend to. They dash off. While running, Sorata said that even if he wasn't sure of the color he wanted to be, he wanted the day of the ceremony to be the color of the cherry blossoms (Sakura).

Rita's in Japan for the third time!

The first time Mashiro cried in the anime. 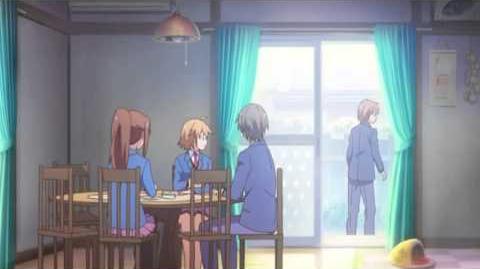