"Welcome to Sakurasou" (さくら荘へようこそ, "Sakurasou e Yōkoso") is the twenty-fourth and final episode of the Sakurasou no Pet na Kanojo adaption. It was aired on March 26, 2013.

The episode starts with a callback to a classic scene from Episode 1 where Sorata was fixing the sign at the gate. Nanami then comes, and comments on his work. Sorata asks Nanami if she's packed up for Osaka. He then notices that she has a small bag and asks about it, with Nanami responding that she will be back soon.

A flashback is then shown of the two in the courtyard at night. Nanami affirms that she wants to be a voice actress. Chihiro-sensei then barges in, and tells her to go back to Osaka and convince her parents. She states that being adult is not making decisions on your own, but learning to heed others. Nanami agrees to her statement. Just before Chihiro-sensei leaves, she tells Nanami that her two years at Sakurasou weren't for nothing.

The scene returns to the present. Misaki then comes in with a rental van to pick them guys. They leave, but not before offering their goodbyes. Just as Chihiro-sensei was to go into Sakurasou, Kazuki comes in and invites her on a date.

The gang sang Kyou no Hi wa Sayounara on their way to Narita Airport. They first see Rita off. After Rita and Ryuunosuke shake hands, she pulls him via his arm so that she can kiss him. The crowd cheers, making Ryuunosuke faint, and angering Maid-chan, who Rita kisses via her master's tablet.

Jin and Nanami are the next to go. At the train station Misaki is seen crying because she can't stand the fact that Jin is leaving. Jin then kisses her, which leaves the others red. He then gives Misaki the marriage form, telling her to hold it until he goes back so they can submit it together. Touched, Misaki hugs Jin whilst crying.

Misaki is the last one to go. She tells the remainders of the group that one, she's studying at Suimei University so she won't be far, and two, that she's leaving the dormitory in their hands. She then heads off. Sorata, meanwhile, asks Ryuunosuke if he can make games on his own. Ryuunosuke replies that although Sorata's programming skills are limited, he can use free game engines to make a game. Ryuunosuke then takes his leave, saying that he has a meeting to attend to. Smiling, he then tells Sorata that while rare he sometimes needs to work outside his room.

Mashiro goes to see the cherry blossoms. Sorata looks as well, and realizes that they were looking at the tree where they met each other. The two admire the blossoms.

On the train to Osaka, Jin and Nanami talk over some coffee. Nanami is nervous, so Jin consoles her by saying that she did the right choice by going back to negotiate with her dad about her future, but also mentions Sorata, which makes her blush.

Sorata and Mashiro then arrive home. Sorata looks at the recently vacated rooms, and remembers Misaki's speech about filling the place. He then hears a thud, and rushes upstairs to find Mashiro toppled. It turns out that Mashiro wanted to hang the painting she made. Sorata then notices the painting, now with Mashiro holding Hikari (which, according to Sorata, is impossible as Hikari would not let Mashiro hold her). Mashiro then asks Sorata for a kiss, under the pretext that everyone was doing it earlier. Sorata panicks, but agrees to it anyway.

Just as he was about to kiss her, Hikari jumps in and scratches Sorata's face. Mashiro then states that they may not kiss for now, but she still kisses Sorata, albeit on his cheeks.

The scene jumps forward to the entrance ceremony of the school. Hase Kanna is seen conversing with her classmates, and she states that she's moving to Sakurasou as she does not want a roommate, let alone a noisy one like the one she already has. Kanna then proceeds to the faculty room to submit her paperwork.

It is then revealed that Kanna was the top scorer in the school's entrance examination. Himemiya Iori is then introduced as the guy who expelled from the regular dormitory because he was caught peeking in the girls' baths there. Chihiro-sensei warns the two that they may never be able to live normal high school lives, but welcomes the two anyway.

Back in the dormitory, Nanami has already returned. Sorata was preparing tuna for the welcome party for the new residents of the dormitory. The two then talked about Nanami's negotiations with her father. She mentions that although her father never really agreed, he had to, given how serious she was, and the time she took proved her case. Nanami then notices another game document written by Sorata. Sorata asks her for help, and she agrees.

Meanwhile, the freshmen residents of the dormitory arrive home. They enter the dormitory, only to be terrified by what they hear and what they see. They enter, and hear someone asking for fresh blood. Sorata then comes out of the kitchen with a blood-laden knife in his hand. This terrifies Iori, and he runs outside, only to see Ryuunosuke holding a sickle. Iori then runs inside, into Mashiro's room.

After noticing Mashiro and her messy room, he introduces himself. He is then interrupted by Mashiro's command to «Take it off». Thinking that Mashiro was making sexual advances, Iori complies. Nanami barges in, and is terrified to see him without a shirt. Mashiro clears the air by saying that she wanted to paint the new residents in her painting, and needed to see him shirtless as men's bodies are hard to paint.

The residents, including an unknown figure, wait for Mashiro to come down. After some idle talk, the strange figure demands that they have dinner. Sorata denies the request. He then notices something strange, and looks at the girl, only to see that the unknown figure is Yuuko (who was known to have failed the entrance exams earlier).

Yuuko then explains that her brother was not informed of the news so that it would be a surprise to him. She tells him that he looked at the wrong number (Sorata looked for 99, when Yuuko's real number was 66). Mashiro finally comes down, with her painting. The new residents are surprised to see themselves in there, let alone after Mashiro was only working for couple of minutes. They are all there except for Yuuko, who Mashiro didn't know was already a resident of Sakurasou.

The door bell then rang. Apparently, someone who moved in next door was at the door. Sorata opened the door only to see Mitaka Misaki, the newly wed next door, who is just Misaki. She explains that she couldn't wait for Jin to graduate, so she went ahead and submitted the marriage form. Misaki then rushes towards the kitchen.

Sorata reflects on the structure of Sakurasou, one that is full of colors, old or new, all whose colors shine on the canvas that is their dormitory.

Flashbacks all the way from the first episode are then shown, with the character's in the painting being revealed as they are given emphasis in the flashbacks. At the end, the painting is shown in full form, with Yuuko having been hastily added. 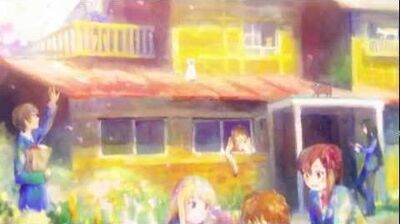